The Sedona real estate market has been on a pretty hot pace for the first five months of 2012. Sales of single family homes in 2012 are on track to be the best year for total number of sales since 2006. As of the end of May there have been 194 single family homes close, compared 168 sales for the same time period in 2011. That is a 15% increase for 2012 compared to 2011. Inventory of single family homes continues on its downward trend with only 342 down from 356 in May 2012, and 59 of those are under contract. In spite of the low inventory and the increased pace of sales, the median sales price is down 3% year to date 2012 compared to the same time period in 2011. This surprises me, you get the feeling that with the low amount of inventory that something is about to give. In looking at the last 12 month period June 2011 to May 2012 compared to June 2010 to May 2011 the total number of sales for the last 12 months was 413 compared to the previous 12 months at 403. Median sales price was flat at $340,000 for both years. Distressed sales (foreclosed and short sales) are still playing major role in the Sedona market. The good news is that for single family sales for the first 5 months of 2012, distressed sales made up 25% of the sales compared to the first 5 months of 2011 at 37.5% and 2010 at 40%. This is a trend we all hope will continue. 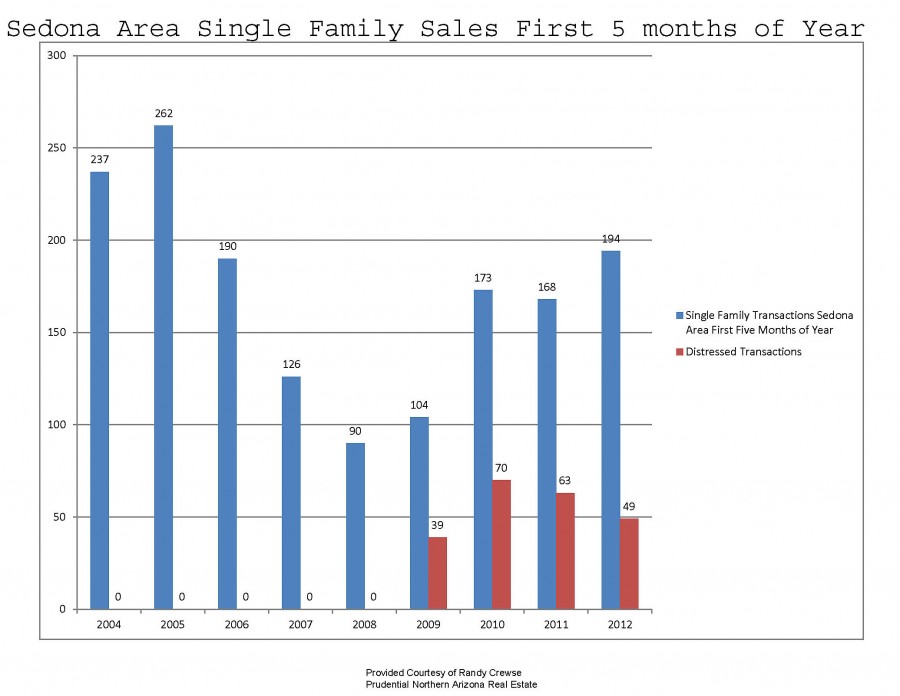 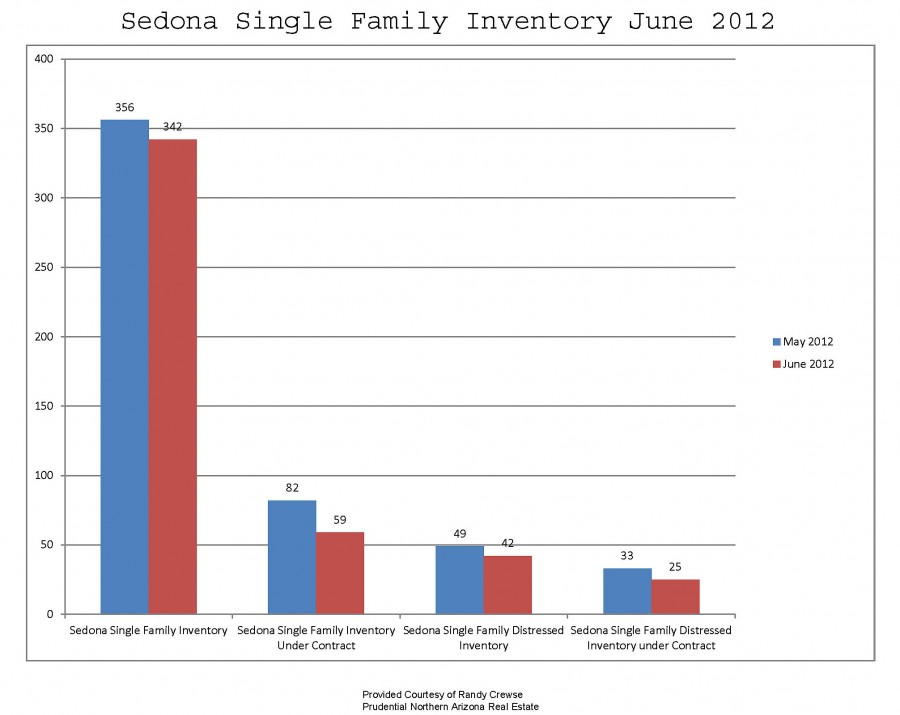 The chart below represents the solds for the first 5 months of 2012 compared to the number of active listings available in each price range. Based on the chart, you can see that for the price ranges up to $400,000 we have a less than a six months supply of inventory. By all accounts this makes these prices range a buyer’s market. Homes listed between $400,000 and $500,000 are not far behind. When you get up above $750,000 sales slow down considerably and the buyers are back in control. There is a about a four year supply of homes in the price ranges above $750,000. 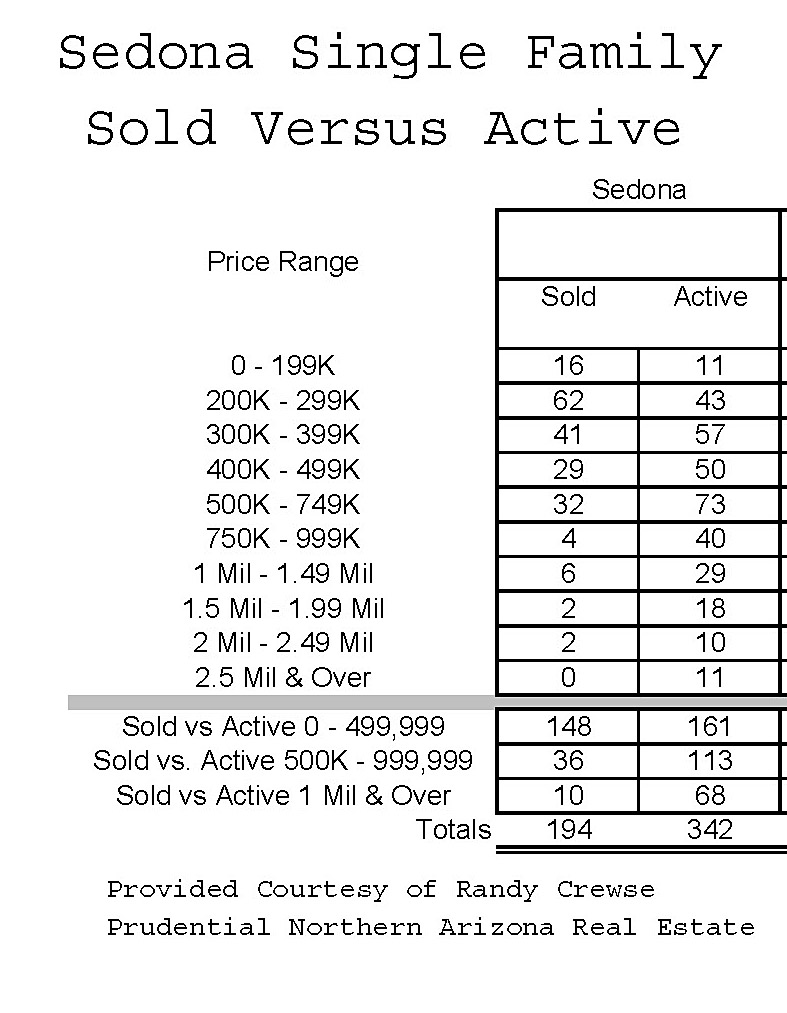 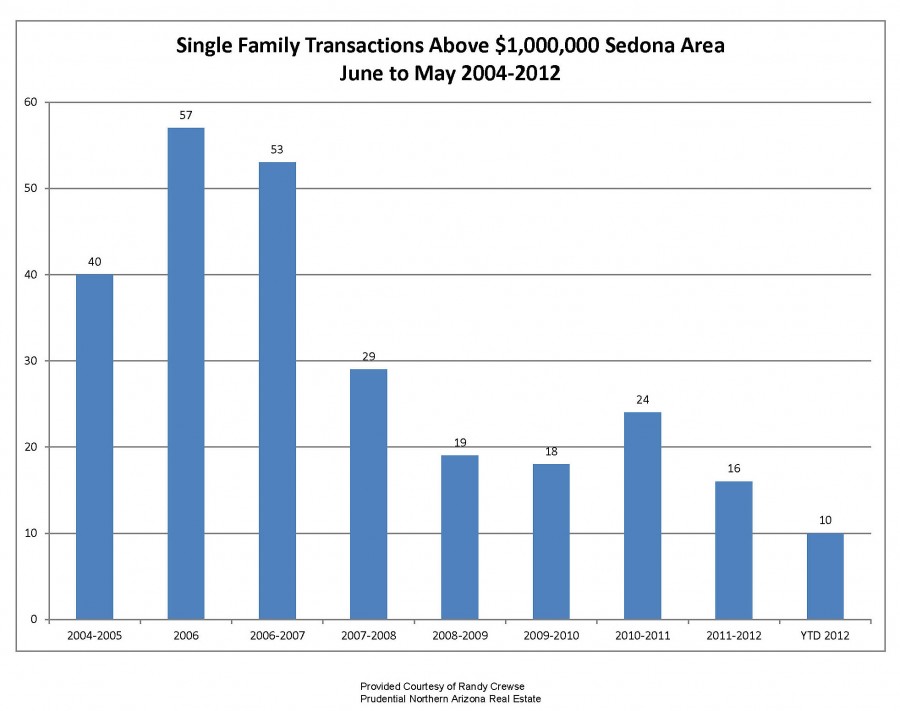 Bottom Line: Something is going to give. The inventory of homes below $500,000 is getting critically short. Interest rates are at historic lows, increasing the buying power of those using financing. There are multiple offers on many of the homes going into escrow. I believe we are on the verge of seeing the median home price go up. When that happens we will see sellers that have been on the sidelines back in the game. In spite of the election, we are setting up for a hot Sedona real estate market for the fall 2012 selling season.