With the rebound in prices over the last several years, many experts are predicting that we will see a continued slowing in the appreciation rate in 2015. With a median sales price in the Sedona area of $427,400 once again the question of affordability comes in to play. Interest rates right now are in the 4% range for a 30 year fixed rate loan and are expected to increase in 2015 again impacting affordability.

The Sedona area was not the only area in the Verde Valley to see prices increase. In the Cottonwood and Cornville area the median price of a single family home rose to $200,000, a 25% increase over 2013 and like the Sedona area, above 2004 prices. Price increases were also seen in the Camp Verde and Rimrock and Lake Montezuma area but not quite so dramatically at 21% and 17% respectively.

From the graph below you can see that the number of transactions in the Sedona area had been REALLY steady for the last 5 years. Given how steady these numbers have been, this is something to keep track of. A change in either direction will signal a change in the market. These numbers have remained steady in spite of decreasing inventory and increasing prices. 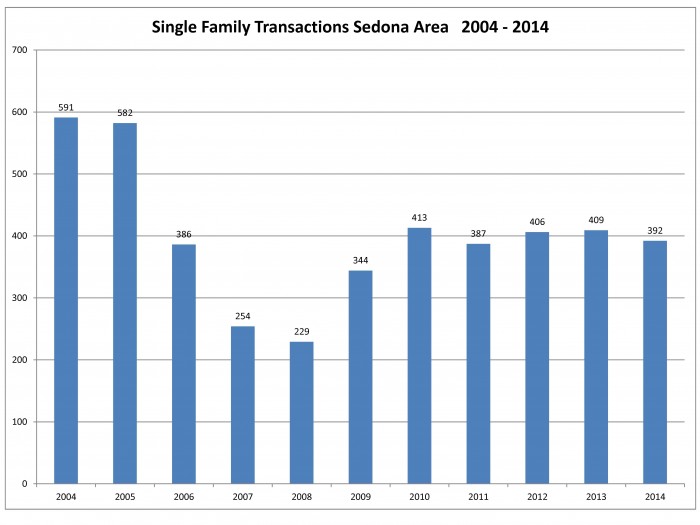 The number of transactions in the other areas of the Verde Valley were off 20% in the Camp Verde area, off 8% in the Cottonwood and Cornville area and were steady in the Rimrock – Lake Montezuma area. So in spite of soft sales numbers we continue to see price increases due primarily to the decreased amount of inventory especially in the lower price range in all areas of our market.
We are truly finally to the point that foreclosed and short sales are not having an impact on the market. Distressed inventory is now 5% of the listing inventory compared to 30% in the ugly days of 2010 and 2011.
Distressed sales now make up less than 10% of the sales compared to 50% in those bleak days of 2011. With the Notice of Trustees sales at pre-recession levels and prices on the increase we will see fewer distressed homes on the market. 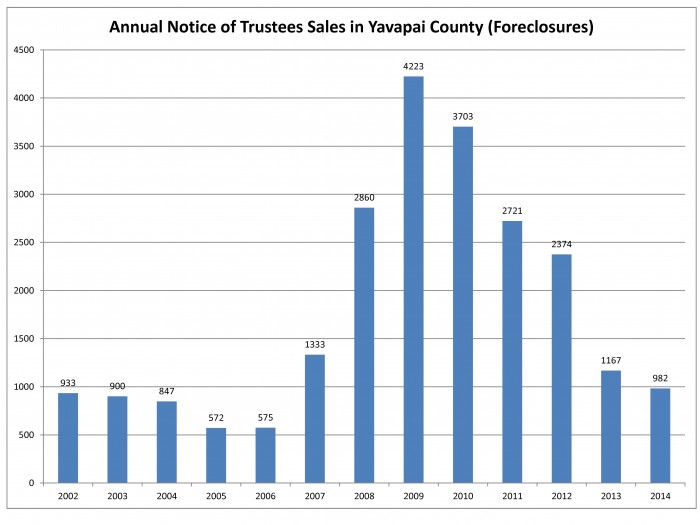 Residential inventory has been on a downward slide since it reached its peak in early 2009. The current Sedona area residential inventory at 361 units, is down 44% from 638 units in February of 2009. Based on the sales for 2014 and current inventory levels for sales under $500,000 we have just under a 6 months’ supply of homes for sale, which puts us at a market in balance for this price range. For the entire range of inventory we have just over an 8 month supply. Homes priced over $1,000,000 have an oversupply of 2 years’ worth of inventory at this time.

The median price of a single family home rose 8.2% in 2014 over 2013. The number of transactions remains steady at around 400 single family sales per year as it has been for the last five years.

The median sales price for Condos and Townhomes in the Sedona area rose to $240,000 for 2014 a 13.5% increase over 2013, their highest level since 2003.The number of transactions for the last 12 month period is 90, down from 96 in 2013. Again more of the same story, decreased inventory, decreased sales and an increase in pricing.

Prices will increase in 2015 but like 2014 we will see a continued slowing of the appreciation rate due to most of the rebound in pricing from recession lows having already occurred, an increase in interest rates, and overall decrease in home affordability. Inventory will remain at similar levels but we could see an increase in inventory as those sellers waiting for prices to increase will think the time is right to put their homes on the market. The Fed is going to raise rates in the early summer but home loan rates need to stay down to keep the real estate recovery on solid footing. Getting a home loan will still be a financial colonoscopy without anesthesia and rates should stay below 5%, still a great deal. So overall 2015 will look a lot like 2014 which should bode well for home buyers, sellers and their real estate agents.