Lack of inventory and rising prices were the watchwords for 2016. Verde Valley residential inventory is off 17% from the beginning of 2016 and median sales prices were up in all areas of the Verde Valley. The graph below will give you a good idea of what is going on in the Sedona area and all over the Verde Valley. This graph represents residential sales and active listings for all types of residential property in the Sedona area over the years 2011, 2015, and 2016 and really demonstrates what has occurred with pricing and inventory over the last 6 years. 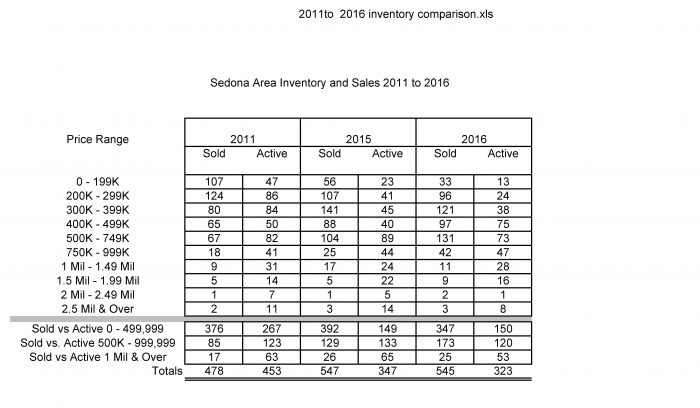 So what about those price increases? In the Sedona area, the median sale price increased in 2016 for the fourth straight year with a 9.4% increase over 2015. This makes the total increase since the bottom of the market in 2012, 37%, an average of 9.25% per year for the last 4 years, quite remarkable.

Broad stroke influences on the real estate market for 2017

Interest Rates:  Mortgage rates might have lost the momentum of their recent upward rise. Between November and December 2016 interest rates jumped .75% to two year highs. A loan of $250,000 costs $110 per month more than it did prior to early November. Many analysts believe that they may already be at their peak for 2017, let’s just hope so. The consensus interest rate for 2017 looks to be in the 4% to 4.25 % range. 2017 should still prove to be an excellent time to shop for a mortgage especially in the light of the 50 year average of 8.25%. With the continued rise in home values buyers need all the help that they can get.

Household Formation: Household formation will be in the 1.25 million new households created per year range for the next several years, up from about 900,000 per year for the last five years. Increased household formation continues to impact vacancy rates as households are created, gotta have a place for these new families to live. First time homebuyers accounted for over 30% of home sales in 2016. This does not directly impact the Verde Valley market as much as most markets due to it being a retirement market, but it does impact our retirement buyers as in many cases they had to sell a home somewhere else to buy one here. An interesting Bureau of Labor Statistics fact to note: there are three times as many baby boomers leaving the job market as there are 25 to 34 year olds entering it.

Sales and Prices: Favorable interest rates and scarcity of inventory will continue to be the basis for upward pressure on prices. Verde Valley residential inventory is down about 17% from where it was at the start of 2016. All areas of the Verde Valley experienced an increase in median sales price in 2016, with all areas in double digits in 2016 except for Sedona coming in at a 9.8% increase. Camp Verde led the pack at 14.7%, followed by Rimrock/Lake Montezuma and Cottonwood at 12.3% and 10.8% respectively. Nationwide, economists do not expect to see as much increase in median sales price in 2017 as there was in 2016.

Cumulative days on the market saw a significant drop to 104 days. This is the lowest time on market in the last 11 years and is indicative of the amount of inventory on the market. Well priced homes are selling fast.

The Bottom Line: Inventory is very low, but we normally see an inventory increase in the first quarter so that should alleviate some pressure there. Interest rates are still really good. The economy, in spite of what some people say, is running on all cylinders should provide us buyers from our feeder markets in the upper Midwest and California. So… buyers, plus cheap money and low inventory will equal higher prices and a solid market for Sedona and the Verde Valley for 2017.

For the complete 2016 Sedona and Verde Valley Real Estate review:https://randycrewse.com/wp-content/uploads/2017/01/Market-Statistics-2016-with-observations-3.pdf